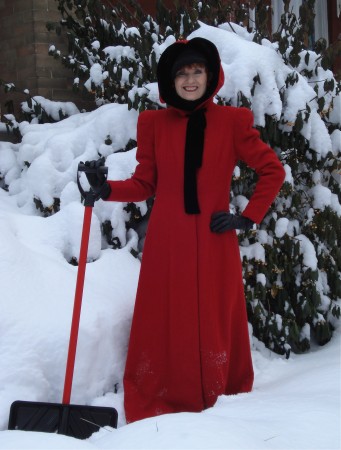 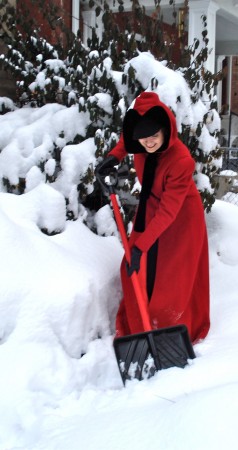 This past weekend presented the first snowstorm of the season.  We’ve had brief bouts of snow over the past few months, but this was the real thing.  Mounds of snow in the garden with soft white blankets stretching as far as the eye can see in an inner city neighborhood.  I don’t have huge amounts of sidewalk to uncover, but another ‘first’ for me, as Nelson was the shovel master.  The SC began the task Saturday morning as snow continued to fall in gentle layers, creating a picturesque winter landscape.  I was feeling a bit ‘snowed under’ as ‘first’s’ trigger memories and along with them an unwelcome lens of insecurity, a veil that clouds my vision as I take on another role in the now absent division of labor.  As I began slowly and methodically moving the snow I noticed that the shovel handle was red.  Suddenly I saw it as an accessory and my mind traveled to my coat inventory for the perfect outerwear to accomplish this mission with more enthusiasm than my current sad, forlorn state.  The vintage red wool maxi coat with hood and black velvet trim (previously worn HERE) nudged its way into my consciousness, and it turned out to be the ideal match.  Who cares if I defiantly shovel the snow in a long red coat, with only myself to entertain (along with Camille who generously took photos). Could this be another example of special effects? I managed to feel a sense of empowerment with the realization that I could get past the first winter storm with the assistance of an outfit and a shovel with a bright red handle.

Old Is The New Black