Crones With Crowns And The Temporary Persona 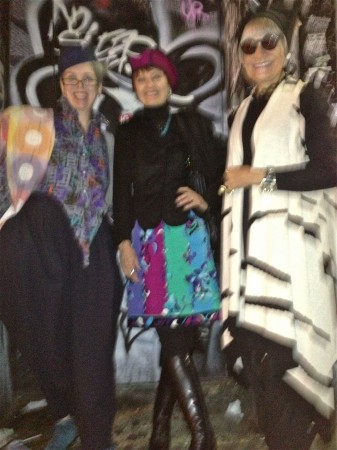 This photo was taken on the street after meeting the Idiosyncratic Fashionistas for cocktails and a bite to eat at Kittchai, a Thai Restaurant in the hotel 60 Thompson Street, on the day after the Fab Over Fifty Fashion Show. I was drawn to its lack of focus which evolved into the photo below, depicting the three of us appearing in a swirl which reflected our outfits. Tequila Minsky HERE stopped us on the street and took photos with our cameras in this graffiti covered doorway.  For a focused photo and commentary on our evening escapade, check out the Idiosyncratic Fashionistas HERE. 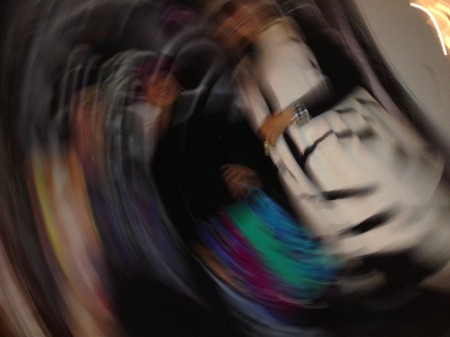 The photographic documentation of ‘Crone Energy.’ 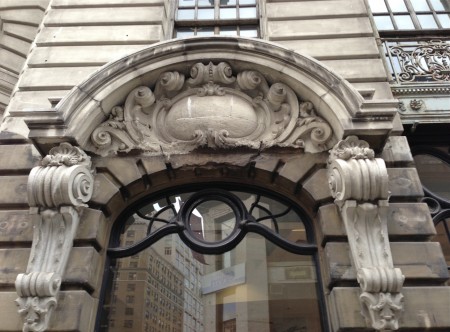 The IFs informed The SC of a sample sale taking place in the Ansonia (photo above) on the Upper West Side, presented by Brigitte, a designer who has decided to close her business which has been located in this majestic and historic building.  Because I arrived at the sale during a time when there was a limited number of shoppers, I had full access to the unusual and architecturally designed fabric hats at unbelievable prices. Needless to say, I have several new residents in the hat room (and gifts for friends) as a result of playing amidst Brigitte’s creativity. 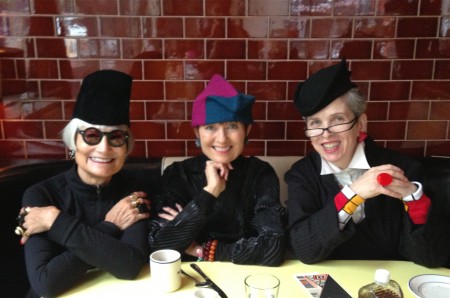 One of Brigitte’s fabric hats made its debut between the interestingly shaped black hats worn by Jean (on the left) and Valerie of the IFs (Idiosyncratic Fashionistas) as we brunched at the Bowery Bar. 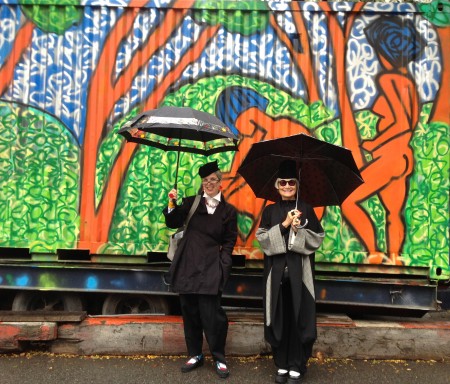 The IFs after brunch and before hat hunting, standing in front of a colorfully grand mural near the Bowery Bar. 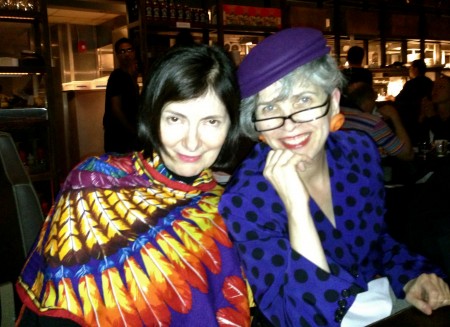 The ever clever and inventive Jean and Valerie of the IFs put together a gathering at the DBGB restaurant on the Bowery to celebrate the date of 10-11-12.  Above is a photo of artist and milliner Carol Markel (on the left) of the blog Femme et Fleur HERE, and Valerie of the IFs decked out in black on blue polka dots for the event.  Carol is wearing the brilliantly vivid silk scarf that she purchased in Paris; she has been blogging about the trip that she and her husband Richard recently enjoyed. 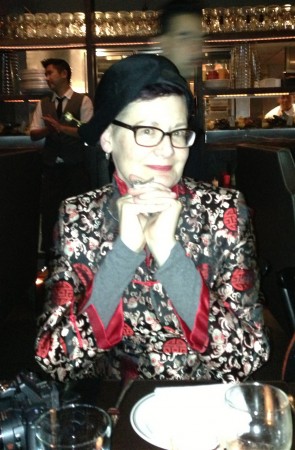 Meeting the beautiful and creative Shelley of the Forest City Fashionista HERE for the first time. 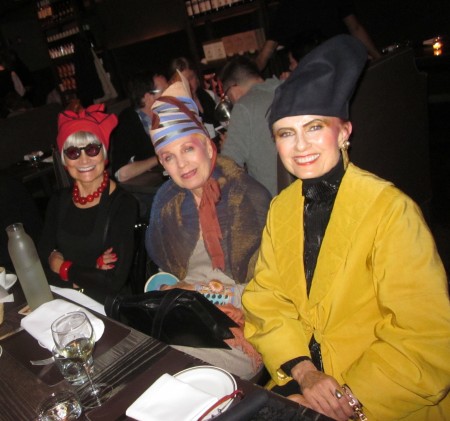 From left to right, Jean of the IFs, Debra Rapoport (in a hat of her own design) and The SC.  Debra and The SC had participated in a magazine photo shoot before the 10-11-12 gathering, and appeared in full makeup.  The makeup artist was going for a David Bowie look and the black eyebrows and darker colors surprised me when I first saw my image.  However, I decided that it was fun and interesting to try a temporary new persona, which added to my list of new experiences and could be easily removed with a return to my more comfortable identity.

The question of what ‘feels too far’ and finding personal style boundaries relates to a recent post by Melanie of Bag and Beret HERE.  It’s interesting to me that  I can wear a hat every day without blinking an eye, but black eyebrows with my coloring made me feel a bit hesitant. Life is fleeting and so was the gift of an unexpected journey of self experimentation and the exploration of an unfamiliar exterior. 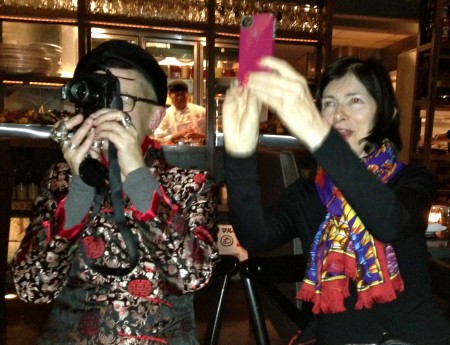 The evening included many examples of bloggers in action!  Shelley (on the left) and Carol take photos in the restaurant as the 10-11-12 event comes to an end.

The SC is joining the celebratory crew at Patti’s Visible Monday HERE.

Downtown and Uptown In The Pink Bow Hat

My Thoughts Are With New Yorkers

Old is Gold - Part Two. There’s nothing like a v

The Style Crone in Profile