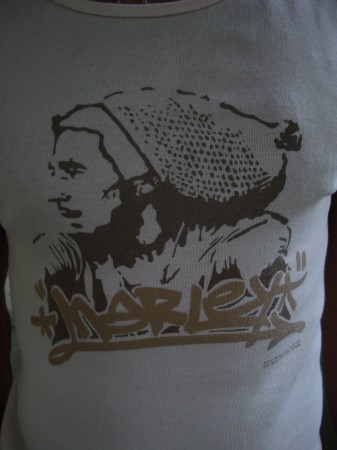 Photo by The Style Crone.

Nelson shared with me that Bob Marley is speaking to him “across the divide.”  It began as he was playing a Bob Marley CD in the car on his way to the gym one morning, and suddenly the lyrics were a direct communication to him.  If he presented to the psych ER (and I worked in the psych ER in the 80’s) with such a statement he would be labeled delusional, but I think  it’s believable. Call me crazy, but it makes sense to me and I don’t think it’s “chemo brain.”  I told our friends in Boston about this phenomenon and they immediately sent him a thrifted Bob Marley T-shirt, which he can be seen wearing frequently about the city. Nelson can be into outfits too!  Today he had his blood drawn in the clinic lab as he always does on the day before chemo, and he wore “the” T-shirt.  The woman who was drawing his blood commented on his shirt and he again shared that Bob Marley was talking to him “across the divide.”  She wisely replied, “Honey, if Bob Marley is talking to you across the divide, you listen to him.”  And The Style Crone agrees!

What to Wear to Chemo