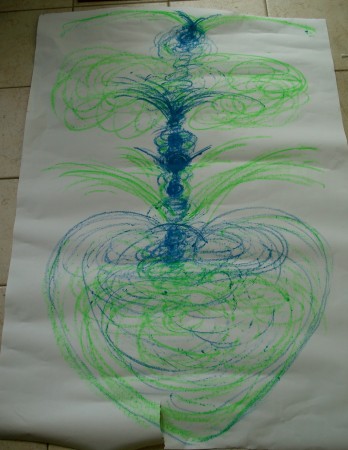 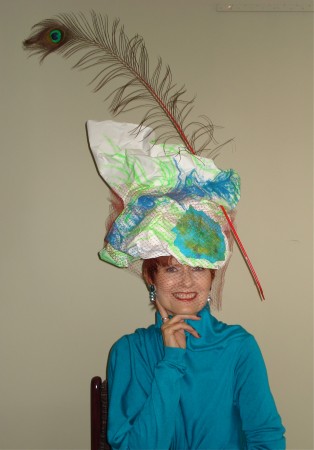 Four weeks ago at The SC’s hospice creative arts support group, we were asked to paint our grief on paper using a choice of two colors from the palette provided.  The first photo above is my visual/visceral projection of this request, which I would not attempt to describe without producing an essay. We were then asked to take our ‘piece’ home and transform it, sharing it later with the group. Last evening I displayed my finished project; I had known immediately that it would take the form of headwear. I had constructed a primitive paper sculpture and attached it to a buckram base typically used for cocktail hats, which for some unknown reason I was able to locate in my studio.   I then added a peacock feather (I love movement in my accessories) along with a teal/green ‘mini painting,’ both of which a friend had included in a display placed near the guest book at Nelson’s memorial service.  Around the time of Nelson’s death I was gifted a collection of vintage veiling by another generous friend; a red vintage veil became the finishing touch to my interpretation of transformation. This hat with veil allowed The SC to peer out from under and through her grief and provided hope that any stage of distress can be changed with time, desire, self acceptance and focus. The process also reinforced the concept that hats provide healing!

The Dining Room in the Orange Sequin Gown