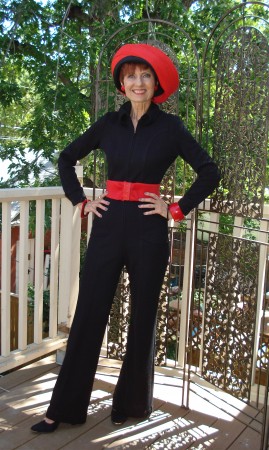 The SC discovered this black/red straw Patricia Underwood hat at an estate sale about a year ago.  As I walked into the closet of the bedroom in the home where the sale was taking place, I noticed a number of hat boxes that reminded me of the black and white striped boxes that we provided for every hat that walked out the door of our 1980’s hat shop.  And then my eyes fell on the three hats sitting on the boxes.  They were indeed from our shop; I recognized each and every one as though becoming reacquainted with old friends.

Inquiring about the owner of the estate, the name that I was given was one of our best customers, a woman that I dearly loved.  I felt saddened by the thought of her passing, along with a sense of synchronicity that I was the fortunate person to find the hats and give them new life.  Lost but now mysteriously found! 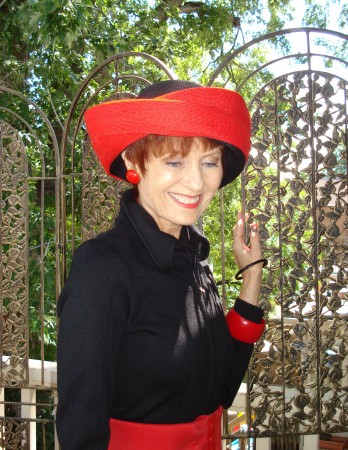 The vintage black Joshua Tree jumpsuit was purchased at another estate sale years ago, as were all accessories including the shoes.  A black jump suit is one of those pieces that simplifies life; add hat, belt, shoes, jewelry and GO. 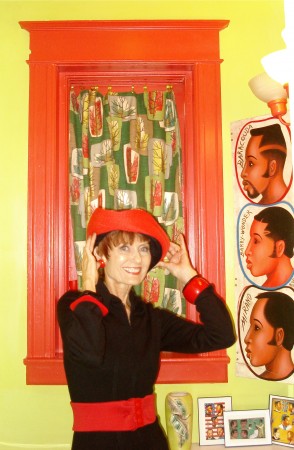 Hat adjustment in the powder room on the first floor of my home, next to the West African barbershop sign.

The other amazing fact about this hat, which is magically flexible and can be worn in a variety of ways, is that it was the hat that my business partner wore in the photo which accompanied an article about the two of us in the Rocky Mountain News in 1986.  My former partner died over a year before Nelson transitioned.  For The SC this is a beloved piece of personal hat history! 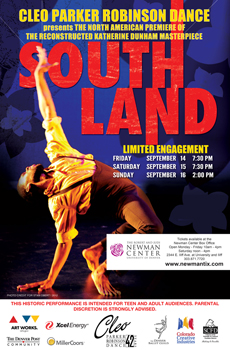 The SC wore most elements of this outfit to the North American Premiere of Southland HERE, a 60 year old ballet by the brilliant Katherine Dunham HERE , recreated by Cleo Parker Robinson, and performed by the Cleo Parker Robinson Dance Company HERE.  The hat was too large for the theatre, so a headwrap took its place for this event.  It was an honor to be present at this remarkable and powerful premiere, attended by many ‘greats’ of the dance world, including members of Katherine Dunham’s family and Julie Belafonte, who performed with the Dunham company and spoke after the show.  Southland was performed in Santiago, Chile in 1951 and again in Paris in 1953, but never again until now.  It was shut down by the United States government after its initial performances and is now viewed as a pre-Civil Rights protest piece.

I went with friends to the theatre and realized that this was the first time that I had attended one of Cleo’s shows without Nelson or Camille, who grew up as a student in Cleo’s dance school but was unable to attend the opening night performance of a piece that was lost but now found.  Even now, new ‘firsts’ continue to present themselves for my consumption.  Not only did I have the thought that N would have loved the performance and that we would have discussed its details for days, but that I was overwhelmingly grateful for the gift that I will forever see the world through his brown and deeply knowing eyes.

Linking up with the gorgeous Patti’s Visible Monday!

1930’s Silk Satin And The Fab Over Fifty Bash