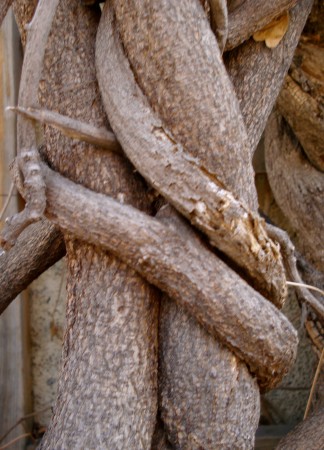 The wisteria branches in the garden speak to me as I walk by, providing a daily image of our relationship.  The SC and Nelson were lovingly entwined and remain so as the days float by, even though his physical presence no longer exists in my current life of confusion.  I don’t have the rhythm of this new life, but perhaps it’s improvisation.  I have been planning the memorial service and the celebration of Nelson’s life down to the minute detail and taking death certificates around the city, following the structured worksheet provided by Natural Transitions.  (Now that is NOT a rose delivery, but it does involve outfits). Co-beneficiary is a new frequently used term, with many tasks lining up for attention, calling for left brain action.  All of this robot like activity takes huge amounts of energy and by the time I am able to sit down and think I feel overwhelming sadness.  And I need to get a tripod so that I can take my own photos.  New learning is on the horizon in many different areas.  So I have been alternating between hyperactivity and immobilization.  However, if Nelson could climb on the rowing machine after chemo, I can blog today.

Downtown and Uptown In The Pink Bow Hat

The Collaboration With Two Sole Sisters